So if you have been following along this lil blog of mine, you may have noticed I’ve become somewhat obsessed with my new pressure cooker. It took me a while to get over my initial fear of it potentially exploding and taking my face off, but now that I’m in the groove with it, I can’t really imagine life without it. I wanted to make a dessert for my July feature in Food & Home Entertaining where I did 5 recipes in a slow cooker and adapted to them to a pressure cooker, so cheesecake was the obvious choice. I have the most amazing, living best cheesecake recipe which I did for my second cookbook ‘sweet’, so I adapted that to the right proportions and then decided to turn it into a lemon meringue cheesecake, because why not get all decadent and over the top while we are at it.

Most baked cheesecakes cook in a water bath in the oven so making it both in a slow cooker and a pressure cooker following a similar method makes total sense and it really worked out so well in both. The most important thing is to get a cake tin small enough so that it can easily submerge into the water within your pressure or slow cooker. I used an 18cm / 7-inch spring form tin to do the job.

The other very important thing is to ensure no water leaks into your cheesecake in the batch (and this applies to when you bake it in the oven too), so you need to wrap the entire base up to the rim in foil too. So it sort of sits within a foil basket. I then made a sling for the cake to make lowering it into and lifting it out of the water easily. You also need to make a small trivet if your pressure cooker doesn’t come with one, and I made this with a coil of foil. 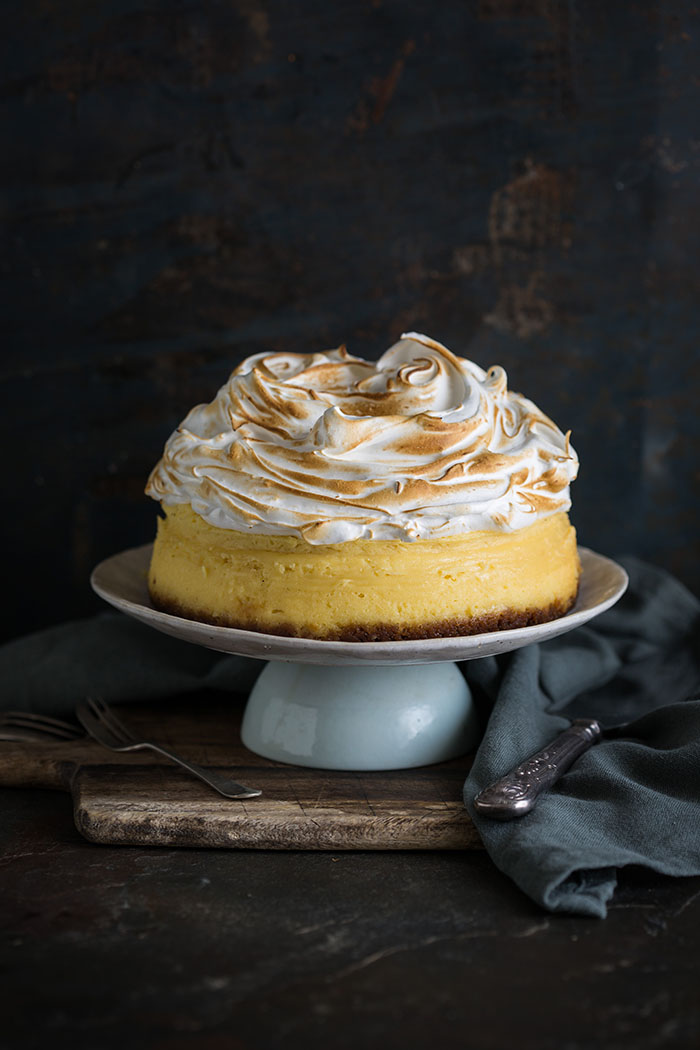 I made an Italian meringue because it is just so damn delicious and fluffy. This one is a really impressive tall top. I singed the edges to give them a pretty torched look and it also adds a caramel flavour, but it’s not entirely necessary.

Make a 2.5 – 3cm high trivet out of foil by rolling a piece into a log and then coiling it into a circle. The cheesecake will sit on this above the water level in the slow cooker. Fill the slow cooker with water until just below the height of the foil trivet (about 2.5cm up the sides). Set the slow cooker to high to preheat.

Tightly fold a layer of aluminum foil over the base and up the sides of an 18cm-cm / 7 inch spring form cake tin. Cut another piece, which will cover the top. The objective is to ensure that no water leaks through the bottom of the tin while cooking. Ensure that the tin is tightly enclosed and that there are no holes, so also line the bottom of the tin with baking paper.

Process all the dry ingredients for the base in a food processor until you have a fairly fine crumb. Add the melted butter and mix. Spread this biscuit mixture over the bottom of the prepared tin and press lightly to create an even layer.

To make the filling, beat the eggs and castor sugar with an electric mixer. Add the cream cheese, lemon zest, and juice and beat until smooth and all the lumps are worked out. Add the cream and mix to combine. Pour this mixture into the biscuit-lined cake tin and smooth out the top with a spatula. The filling should reach just below the top of the tin. Spray the second piece of foil with cooking spray and secure this (sprayed side in contact with the cheesecake) very tightly over the cheesecake tin.

Place the cheesecake on top of the trivet in the slow cooker (you can create a sling with foil if you find it easier to lower into the pot).

Cook for 3 hours in the slow cooker on high then turn off and leave for a further hour before removing and allowing to cool. Refrigerate until ready to serve

Place a trivet into the bottom of the pressure cooker as you did with the slow cooker sealing the sides and bottom too. Use a sling of foil to lower it into the pot. Pour 1.5 cups of water into the pressure cooker and cook for 30 minutes on high. Allow 10 minutes of natural release and then use the quick release to take out any remaining pressure. Allow to cool and refrigerate before serving with the meringue topping.

When you are ready to serve and after the cheesecake has been cooled in the fridge, make the Italian meringue. Whisk the egg whites with an electric stand mixer until the soft peak stage. Slowly add half the sugar one tablespoon at a time and beat until glossy.

Heat the water, remaining sugar, and cream of tartar in a small pot and bring to a boil. Make sure all the sugar has dissolved and the syrup is bubbling. Pour this hot syrup into the meringue mixture while the beater is still running in a slow steady stream. Continue to beat the meringue for a further 3 – 4 minutes.

Pile the meringue onto the cooled cheesecake and singe the edges with a blowtorch to brown (optional).

My other slow cooker to pressure cooker recipes:

Chicken with white wine and herbs

My best baking recipes on Drizzle&Dip