I was convinced that the cheesecake from my second cookbook sweet was the best I had made. It took a bit of work to get it to the right consistency. I wanted it heavy but light and not cloyingly sweet. A friend even entered into the best cheesecake in Johannesburg competition and it won, so I was affirmed that at least it was very good. Until I tested this Basque burnt cheesecake. Now I’m convinced this is cheesecake heaven and it is the culmination of a slight obsession.

I first ate it in January at Tjing Tjing Momiji as part of the dessert plate and I wept a little because it was so perfect. They made mini versions which were also baked in the signature roughly folded baking paper and served it with a slightly sour cherry compote that complimented it perfectly. This cheesecake really doesn’t need anything but if it did, a tart cherry sauce is all I could imagine it would be. The pastry chef generously told me the origins of the recipe and I think I wept again. More joy.

I was in a rush to make it this week because the 1 kg of Philadelphia cream cheese was on expiry and needed to be used. I bought it just before lockdown and never got around to it. On my first test 4 months ago, I used the original recipe from  La Viña in San Sebastian It’s all over the internet as Basque burnt cheesecake but its also in the cookbook Basque Country by Marti Buckley which I absolutely adore. I halved the quantities for that test and baked it in a smaller pan at the very high temp recommended and this resulted in it being too burnt on the outside and too runny in the middle. Further research assured me that it was meant to be like this, but I wanted it to be cooked through and set. More Googling (I told you this was an obsession) and I got to the Bon Appetit version which had slightly tweaked quantities with weirdly less sugar, an extra egg and very precise instructions to prepare it. The texture in the pic looks like what I wanted. The tricky bit comes in with the time in the oven and the temperature. I baked it at 180C / 350F fan for about 50 minutes longer than the recipe. I think my oven runs cool especially on the fan and 180C fan is in fact 180C. When I baked it on the conventional setting for round 2, the top element burnt the cheesecake, so I prefer to use the fan for more of an even bake. I watched it like a hawk and took it out after 1 hour and 50 minutes when I was 100% convinced it was cooked through despite it still being very jiggly. It puffs up like a souffle and then deflates fairly dramatically as it cools and it absolutely must do this.

I know I’m banging on and on here about this but it’s a very expensive cheesecake to make so you don’t want to mess it up. My advice is to follow the Bon Appetit recipe precisely as I did and then bake it at a lower temp for longer and until you get the colour that I (and BA) achieved. Or do what they did but then don’t blame me if something goes wrong. Remove, cool and allow to fully set in a cool room or a fridge overnight.

I’ve shamelessly copied the recipe off the BA website just making it metric (and correcting some grammar). Doesn’t it drive you bonkers when you see imperial recipes? I’ve adjusted the method to my lower temperature, but you could just follow the instruction on Bon Appetit if you prefer.

This is a recipe for the famous Basque burnt cheescake with the Bon Appetit tweaks. I have converted this to metric measurements and baked it for longer at a slightly lower temperature.

Place a rack in the middle of oven; preheat to 180C / 350F fan assisted. Line the pan with 2 overlapping sheets of baking paper in your 25-26cm spring form baking tin, making sure the paper comes at least 5cm above the top of the pan on all sides. Because the paper needs to be pleated and creased in some areas to fit in the pan, you won’t end up with a clean, smooth outer edge to the cake; that’s okay! Place pan on a rimmed baking sheet.

In the bowl of a stand mixer with the paddle attachment, beat the cream cheese and sugar on medium-low speed, scraping downsides of the bowl, until very smooth, no lumps remain, and sugar has dissolved about 2 minutes.

Increase the speed to medium and add eggs one at a time, beating each egg for 15 seconds before adding the next. Scrape down the sides of the bowl, then reduce the mixer speed to medium-low. Add cream, salt, and vanilla and beat until combined, about 30 seconds.

Turn off the mixer and sift flour evenly over cream cheese mixture. Beat on low speed until incorporated, about 15 seconds. Scrape down the sides of the bowl and continue to beat until batter is very smooth, homogenous, and silky about 10 seconds.

Pour the batter into the prepared pan. Bake cheesecake until deeply golden brown on top and still very jiggly in the centre, 1.5 hours to 1 hour and 45 minutes.

Let cool slightly (it will fall drastically as it cools), then unmold. Let cool completely. Carefully peel away the parchment from sides of cheesecake. Using a knife that you have dipped into hot water and wiped dry (if you want a clean edge), slice into wedges and serve at room temperature, preferably with a glass of sherry alongside. 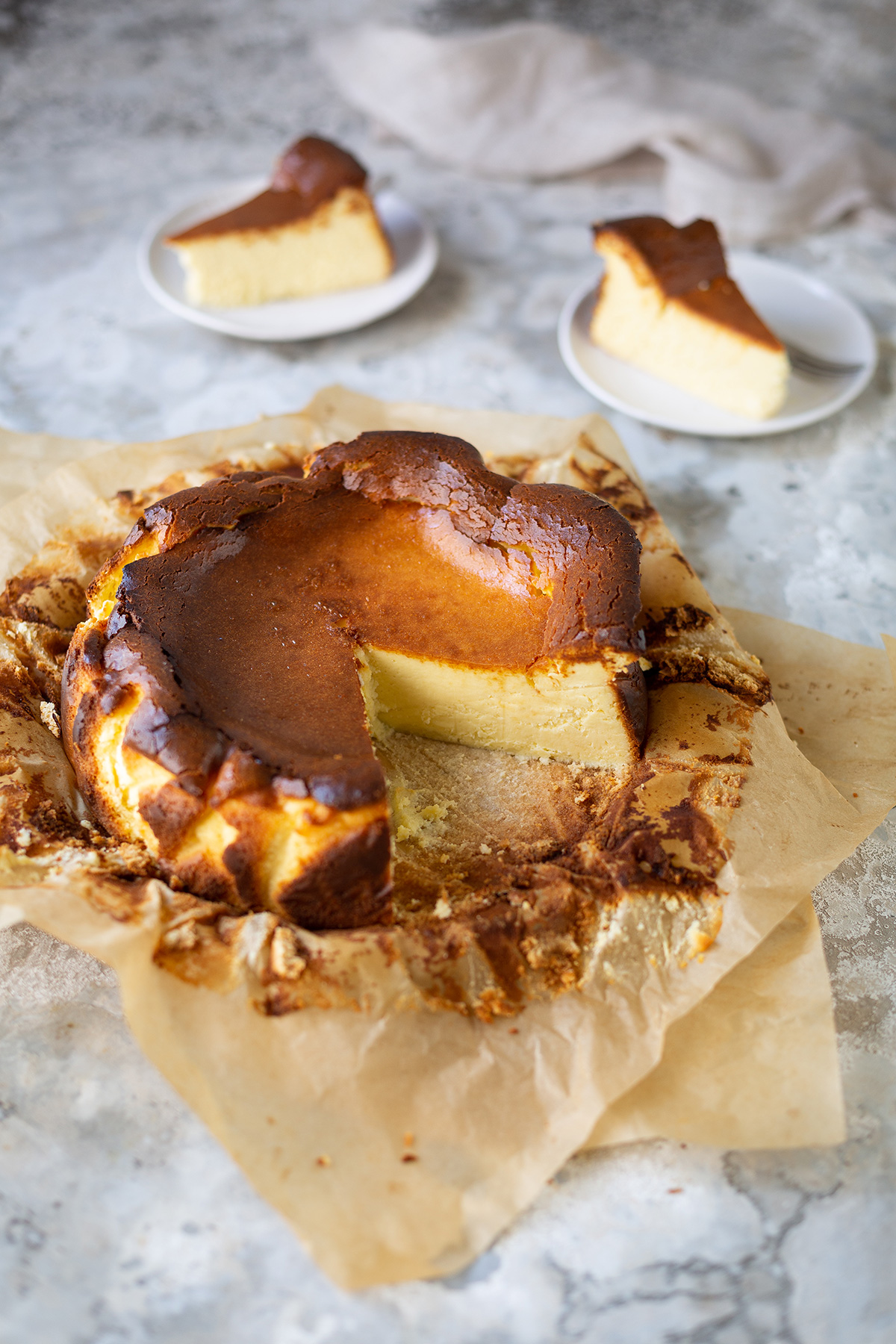